Just like most other things, architecture evolves with time. While learning about the majestic buildings and architecture of the past is always fun, the futuristic modern architecture is a completely different story. Whether we envision futuristic architecture with sleek curves or a minimalist design with sharp edges, it is truly inspirational.

So, what will the modern architecture of the future look like? Scroll down to take a look at some buildings that give us a sneak peek into what the future may hold for us!

Designed by the celebrated Iraqi-British architect, Zaha Hadid, Heydar Aliyev is famous for the lack of sharp angles and unique outlook. The mellow flowing curves and round edges add a futuristic vibe to the building. The center is named after the first sectary of Azerbaijan, Heydar. This beautiful modern architecture is located in the heart of Baku and played a pivotal role in the redevelopment of the city.

Overlooking Lake Michigan, the Milwaukee Art Museum building is nothing less than a work of art itself. The museum contains around 25,000 works of art and is considered to be one of the largest museums in the US. However, the architecture itself is also an architectural landmark. It is an amalgamation of three buildings – each designed by a different architect. Together, they complete a futuristic design like nothing else!

Designed by a local firm ALA, the Helsinki Central Library Oodi is a 185,774 sq.ft. Finnish spruce timber-clad structure. With its rectangular shape, glass walls, and undulating roof – this is not an ordinary library. Many people believe that the futuristic architecture of the library has been inspired by icebergs.

Büro Ole Scheeren, the mastermind architect behind the famous DUO, used hexagonal grids shaped like honeycombs, to complete DUO, which was his first project in Singapore. The modern, futuristic appearance and majestic appeal of the DUO building are truly one of a kind. It is one of those modernistic designs that you have to see to believe!

Think a composition of gigantic, concrete, rectangular blocks. The image that comes to mind must be something similar to the Visual Arts Building at the University of Iowa. Designed by Steven Holl, the building is designed as a stack of 3D concrete frame boxes. The façade is packed with minimalist square windows that allow natural light and ventilation inside this majestic block structure.

Don’t mistake Yangzhou Bookstore for an ordinary bookshop. It was designed and created by the XL-Muse, a Shanghai-based studio for book retailers. The amazing thing about this architecture is the optical illusions that are employed to create an ultra-modern futuristic look. Arched shelves and seemingly never-ending tunnels of books are some prominent features of this extraordinary bookstore in Yangzhou.

The tilted angle of the Tower of Pisa holds nothing over the amazing dangerously-slanted yet practical 46,000 sq. ft. structure at the Colorado Springs’ Air Force Academy. This futuristic building is symbolic and acts as the nexus between areas for cadets at the academy and the general public.

These are some of the most iconic buildings of modern architecture that can help us envision what the buildings of the future may look like. Each of these structures is unique, awe-inspiring, and breathtaking in its own way! 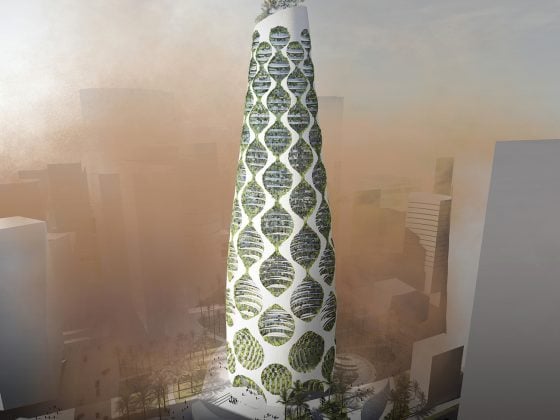 Forest In The Sky, The Ecologically Vertical Oasis Building 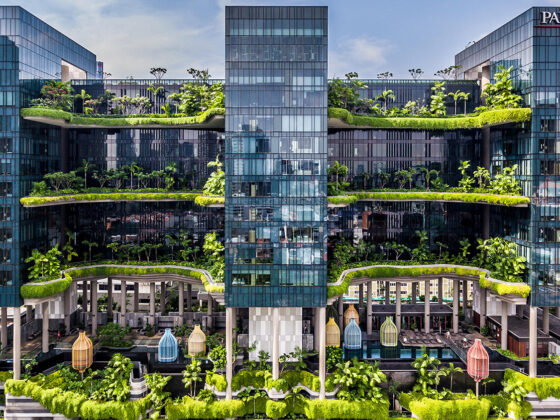 7 Amazing Sustainable buildings around the World